Books: 50 Watches That Changed The World 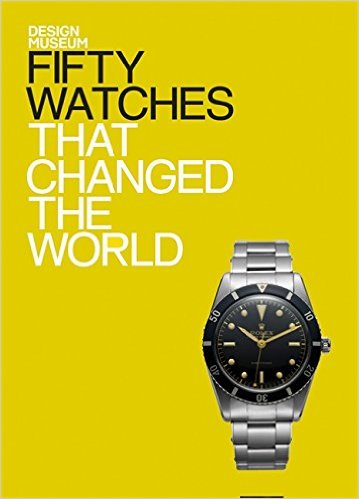 Sometimes, it doesn’t pay to have blind faith in brands. I stopped buying watch-related books willy-nilly after my library passed the 300-books mark. I decided to be selective, limiting myself to either all-new topics not covered before, such as brand histories of manufacturers not previously documented, or new titles from people I respect, including James Dowling, Osvaldo Patrizzi, Giampiero Negretti and peerless mavens of that calibre.

How far, then, could I go wrong with a book published by the Design Museum? Surely this body wouldn’t screw up a title called 50 Watches That Changed the World?

Let me make clear a few points before going any further. I do not want this review written off as mere bitchery, and I assure you that I am hardly suffering at the loss of £12 plus postage. I’ve had corked wines costing more than that, and didn’t resort to screaming at the supplier.

Firstly, I realise that this is part of a series aimed at museum visitors, and must appeal to a wide and general audience. Secondly, I know that design is the criteria, more so than actual technical achievement – although the contents fluctuate on that by including as many technical points as design features. Thirdly, I am aware that there will never be a consensus among critics or commentators when lists such as this are made. Lastly, I do not know the author, Alex Newson, beyond his title as a curator at the Design Museum, so there is nothing personal in this at all.

Let me be brutal: Any book with this emphatic a title that doesn’t number among its 50 (and I am thinking solely about aesthetics and influencing the form, not calibres nor tech) the Cartier Tank, the Jaeger-LeCoultre Reverso, Patek Philippe’s immortal Calatrava, Chanel’s J12, the Bulgari “Bvlgari Bvlgari”, the Audemars Piguet Royal Oak, any Panerai, IWC’s Portugieser, Mk 11 nor ceramic Da Vinci, Doxa’s orange dial, the Breitling Navitimer, Blancpain’s Fifty Fathoms – to name but a few – is seriously deficient.

Think about it. This book ignores, among other game changers of the wristwatch’s visual language, the two models that completely transformed the matter of watch size: Panerai and IWC’s Portugieser, both of which can lay claim to heralding the move to massive watches. Praising the Nautilus without mentioning the Royal Oak that virtually forced its birth? And if you do want to get tech-y, no mention of George Daniels’ co-axial movement, first appearing in an Omega, the 1990s Swatch that pre-dated all the “smart watches”, the use of silicon parts and too many others worth more than mere fashion pieces – despite the primary concern regarding design.

There is nothing about this book to recommend it, unless you’re one of those tech geeks who loves plastic watches with batteries inside. Clearly, the compiler is enamoured of gadgetry and gimmickry. And in need of a semester or two in Watch History 101.

And another thing: there’s only one “s” in Casio.